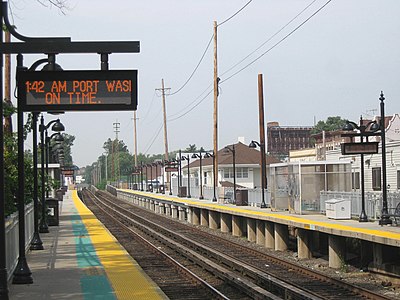 Looking west
Broadway is a station on the Long Island Rail Road's Port Washington Branch in the Murray Hill neighborhood of Queens, New York City. The station is part of CityTicket. The station is east of an overpass at the intersection of 162nd Street and Northern Boulevard and is 11.1 miles (17.9 km) from Penn Station in Midtown Manhattan. A renovation in 2008 added wheelchair ramps.

Originally built on October 27, 1866 by the New York and Flushing Railroad, Broadway Station was originally named as East Flushing station until May 1872 when it was renamed for Broadway, the old name used for the section of Northern Boulevard (NY 25A) passing through Flushing and Auburndale. The present elevated station was built 1913. By the 1930s the street name changed to avoid confusion with another Broadway located in western Queens, but the station name remained the same. Two restoration projects took place during the early 21st century: one in 2003 that restored the station house, and another between 2007-2008 that restored the platforms and added wheelchair ramps.