Broadway is a road in the U.S. state of New York. Broadway runs from State Street at Bowling Green for 13 mi (21 km) through the borough of Manhattan and 2 mi (3.2 km) through the Bronx, exiting north from the city to run an additional 18 mi (29 km) through the municipalities of Yonkers, Hastings-On-Hudson, Dobbs Ferry, Irvington, and Tarrytown, and terminating north of Sleepy Hollow in Westchester County. 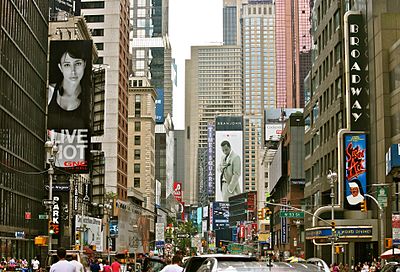 It is the oldest north–south main thoroughfare in New York City, with much of the current street beginning as the Wickquasgeck trail before the arrival of Europeans. This formed the basis for one of the primary thoroughfares of the Dutch New Amsterdam colony, which continued under British rule, although most of it did not bear its current name until the late 19th century.

Broadway in Manhattan is known widely as the heart of the American commercial theatrical industry, and is used as a metonym for it, as well as in the names of alternative theatrical ventures such as Off-Broadway and Off-off-Broadway.

Broadway was originally the Wickquasgeck trail, carved into the brush of Manhattan by its Native American inhabitants. This trail originally snaked through swamps and rocks along the length of Manhattan Island.

Upon the arrival of the Dutch, the trail was widened and soon became the main road through the island from Nieuw Amsterdam at the southern tip. The Dutch explorer and entrepreneur David Pietersz. de Vries gives the first mention of it in his journal for the year 1642 ("the Wickquasgeck Road over which the Indians passed daily"). The Dutch called it the Heeren Wegh or Heeren Straat, meaning "Gentlemen's Way" or "Gentlemen's Street" – echoing the name of a similar street in Amsterdam – or "High Street" or "the Highway"; it was renamed "Broadway" after the British took over the city, because of its unusual width. Although currently the name of the street is simply "Broadway", in a 1776 map of New York City, it is labeled as "Broadway Street".

In the 18th century, Broadway ended at the town commons north of Wall Street. The part of Broadway in what is now lower Manhattan was known as Great George Street. Traffic continued up the East Side of the island via Eastern Post Road and the West Side via Bloomingdale Road. The latter, which opened in 1703, continued up to 117th Street and contributed to the development of the modern Upper West Side into an upscale area with mansions.

In her 1832 book Domestic Manners of the Americans, Fanny Trollope wrote of her impressions of New York City in general and of Broadway in particular:

This noble street may vie with any I ever saw, for its length and breadth, its handsome shops, neat awnings, excellent trottoir, and well-dressed pedestrians. It has not the crowded glitter of Bond Street equipages, nor the gorgeous fronted palaces of Regent Street; but it is magnificent in its extent, and ornamented by several handsome buildings, some of them surrounded by grass and trees.

In 1868, Bloomingdale Road between 59th Street (at the Grand Circle, now Columbus Circle) and 155th Streets would be paved and widened, becoming an avenue with landscaped medians. It was called "Western Boulevard" or "The Boulevard". An 1897 official map of the city shows a segment of what is now Broadway as "Kingsbridge Road" in the vicinity of Washington Heights.

On February 14, 1899, the name "Broadway" was extended to the entire Broadway / Bloomingdale / Boulevard / Kingsbridge complex.

In the 20th century, a 30-block stretch of Broadway, extending mainly between Times Square at 42nd Street and Sherman Square at 72nd Street, formed part of Manhattan's "Automobile Row". Before the first decade of the 20th century, the area was occupied mostly by equestrian industries and was "thoroughly lifeless", but by 1907, The New York Times characterized this section of Broadway as having "almost a solid line of motor vehicle signs all the way from Times Square to Sherman Square". In the late 1900s and early 1910s, several large automobile showrooms, stores, and garages were built on Broadway, including the U.S. Rubber Company Building at 58th Street, the B.F. Goodrich showroom at 1780 Broadway (between 58th and 57th Streets), the Fisk Building at 250 West 57th Street, and the Demarest and Peerless Buildings at 224 West 57th Street.

Broadway once was a two-way street for its entire length. The present status, in which it runs one-way southbound south of Columbus Circle (59th Street), came about in several stages. On June 6, 1954, Seventh Avenue became southbound and Eighth Avenue became northbound south of Broadway. None of Broadway became one-way, but the increased southbound traffic between Columbus Circle (Eighth Avenue) and Times Square (Seventh Avenue) caused the city to re-stripe that section of Broadway for four southbound and two northbound lanes. Broadway became one-way from Columbus Circle south to Herald Square (34th Street) on March 10, 1957, in conjunction with Sixth Avenue becoming one-way from Herald Square north to 59th Street and Seventh Avenue becoming one-way from 59th Street south to Times Square (where it crosses Broadway). On June 3, 1962, Broadway became one-way south of Canal Street, with Trinity Place and Church Street carrying northbound traffic.

In 2001, a one-block section of Broadway between 72nd Street and 73rd Street at Verdi Square was reconfigured. Its easternmost lanes, which formerly hosted northbound traffic, were turned into a public park when a new subway entrance for the 72nd Street station was built in the exact location of these lanes. Northbound traffic on Broadway is now channeled onto Amsterdam Avenue to 73rd Street, makes a left turn on the three-lane 73rd Street, and then a right turn on Broadway shortly afterward.

In August 2008, two traffic lanes from 42nd to 35th Streets were taken out of service and converted to public plazas. Additionally, bike lanes were added on Broadway from 42nd Street down to Union Square.

Since May 2009, the portions of Broadway through Duffy Square, Times Square, and Herald Square have been closed entirely to automobile traffic, except for cross traffic on the Streets and Avenues, as part of a traffic and pedestrianization experiment, with the pavement reserved exclusively for walkers, cyclists, and those lounging in temporary seating placed by the city. The city decided that the experiment was successful, and decided to make the change permanent in February 2010. Though the anticipated benefits to traffic flow were not as large as hoped, pedestrian injuries dropped dramatically and foot traffic increased in the designated areas; the project was popular with both residents and businesses. The current portions converted into pedestrian plazas are between West 47th Street and West 42nd Street within Times and Duffy Squares, and between West 35th Street and West 33rd Street in the Herald Square area. Additionally, portions of Broadway in the Madison Square and Union Square have been dramatically narrowed, allowing ample pedestrian plazas to exist along the side of the road.

In May 2013, the NYCDOT decided to redesign Broadway between 35th and 42nd Streets for the second time in five years, owing to poor connections between pedestrian plazas and decreased vehicular traffic. With the new redesign, the bike lane is now on the right side of the street; it was formerly on the left side adjacent to the pedestrian plazas, causing conflicts between pedestrian and bicycle traffic.

In spring 2017, as part of a capital reconstruction of Worth Square, Broadway between 24th and 25th Street was converted to a "shared street" where through vehicles are banned and delivery vehicles are restricted to 5 miles per hour (8.0 km/h). Delivery vehicles go northbound from Fifth Avenue to 25th Street for that one block, reversing the direction of traffic and preventing vehicles from going south on Broadway south of 25th Street. The capital project expands on a 2008 initiative where part of the intersection of Broadway and Fifth Avenue was repurposed into a public plaza, simplifying that intersection. As part of the 2017 project, Worth Square was expanded, converting the adjoining block of Broadway into a "shared street".