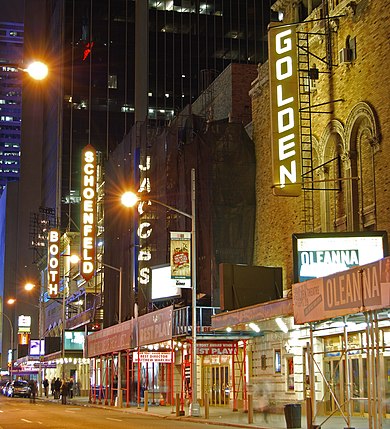 The John Golden Theatre, [Bernard B. Jacobs Theatre, Gerald Schoenfeld Theatre and Booth Theatre on West 45th Street in Manhattan's Theater District
Broadway theatre, also known simply as Broadway, refers to the theatrical performances presented in the 41 professional theatres, each with 500 or more seats, located in the Theater District and Lincoln Center along Broadway, in Midtown Manhattan, New York City. Broadway and London's West End together represent the highest commercial level of live theater in the English-speaking world.

While the thoroughfare itself is eponymous with the district and its collection of 41 theaters, and is closely identified with Times Square, only four of the theaters are located on Broadway itself (being the Broadway Theatre, the Palace Theatre, the Minskoff Theatre, and the Winter Garden Theatre). The rest are located on the numbered cross streets extending from the Nederlander Theatre one block south of Times Square on West 41st Street, north along either side of Broadway to 53rd street, as well as the Vivian Beaumont Theater, at Lincoln Center on West 65th street. While exceptions exist, the term "Broadway theatre" is generally reserved for venues with a seating capacity of at least 500 people, smaller theaters are referred to as off-Broadway (regardless of location), while very small venues (less than 100) are called off-off-Broadway, a term that can also apply to non-commercial or avant garde theater, or productions held outside of traditional theater venues.

Most Broadway shows are musicals. Historian Martin Shefter argues that "'Broadway musicals', culminating in the productions of Richard Rodgers and Oscar Hammerstein, became enormously influential forms of American popular culture" and contributed to making New York City the cultural capital of the world."