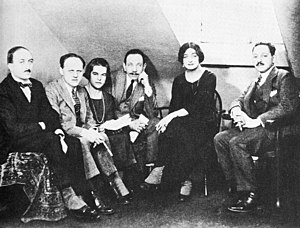 The Theatre Guild is a theatrical society founded in New York City in 1918 by Lawrence Langner, Philip Moeller, Helen Westley and Theresa Helburn. Langner's wife, Armina Marshall, then served as a co-director. It evolved out of the work of the Washington Square Players.

Its original purpose was to produce non-commercial works by American and foreign playwrights. It differed from other theaters at the time in that its board of directors shared the responsibility of choosing plays, management, and production. The Theatre Guild contributed greatly to the success of Broadway from the 1920s throughout the 1970s.

The Guild has produced a total of 228 plays on Broadway, including 18 by George Bernard Shaw and seven by Eugene O'Neill. Other major playwrights introduced to theatre-going Americans include Robert E. Sherwood, Maxwell Anderson, Sidney Howard, William Saroyan, and Philip Barry. In the field of musical theatre, the Guild has promoted works by Richard Rodgers, teamed with both Lorenz Hart and Oscar Hammerstein II, George and Ira Gershwin, Jule Styne, and Meredith Willson, all of which have become classics. Under President John F. Kennedy, the Guild was engaged to assemble a U.S. theatre company, headed by Helen Hayes, to tour the capitals of Europe and South America with works by Tennessee Williams, Thornton Wilder, and William Gibson.

In 1968, the Guild became involved in the travel field by taking 25 of its subscribers to European capitals to see plays. In 1975, it instituted its Theatre At Sea program with a 17-day cruise aboard the Rotterdam with Hayes and Cyril Ritchard. Since then they have hosted more than thirty cruises, each with seven or eight performers. Among them have been Alan Arkin, Zoe Caldwell, Anne Jackson, Cherry Jones, Richard Kiley, Eartha Kitt, Patricia Neal, Lynn Redgrave, Gena Rowlands, Jean Stapleton, Eli Wallach, and Lee Roy Reams, who served as the program's resident director.

The last Broadway play produced by The Theatre Guild was State Fair in 1996.