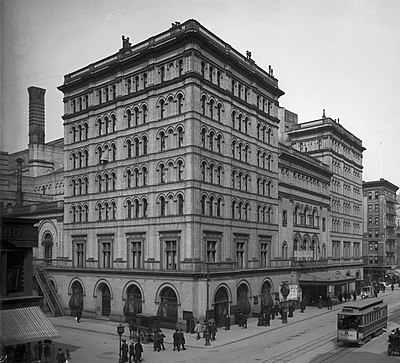 Sometimes referred to as "the old Met", the Metropolitan Opera House opened on October 22, 1883, with a performance of Faust. It was located at 1411 Broadway, occupying the whole block between West 39th Street and West 40th Street on the west side of the street in the Garment District of Midtown Manhattan. Nicknamed "The Yellow Brick Brewery" for its industrial looking exterior, the original Metropolitan Opera House was designed by J. Cleaveland Cady. On August 27, 1892, the nine-year-old theater was gutted by fire. The 1892−93 season was canceled while the opera house was rebuilt along its original lines. During that season, the Vaudeville Club, which eventually became the Metropolitan Opera Club, was founded and hosted entertainment in the undamaged portions of the house.

In 1903, architects Carrère and Hastings extensively redesigned the interior of the opera house. The familiar golden auditorium with its sunburst chandelier, and curved proscenium inscribed with the names of six composers (Gluck, Mozart, Beethoven, Wagner, Gounod and Verdi), dates from this time. The first of the Met's signature gold damask stage curtains was installed in 1906, completing the look that the old Metropolitan Opera House maintained until its closing.

In 1940, ownership of the opera house shifted from the wealthy families who occupied the theater's boxes to the non-profit Metropolitan Opera Association. At this time the last major change to the auditorium's interior was completed. The second tier of privately held boxes (the "grand tier") was converted into standard row seating. This enlarged the seating capacity and left only the first tier of boxes from the "golden horseshoe" of the opera house's origins as a showplace for New York society.

The Met had a seating capacity of 3,625 with 224 standing room places.

While the theater was noted for its excellent acoustics and elegant interior, as early as the 1900s the backstage facilities were deemed to be severely inadequate for a large opera company. Scenery and sets were a regular sight leaning against the building exterior on 39th Street where crews had to shift them between performances. Various plans were put forward over the years to build a new home for the company and designs for new opera houses were created by various architects including Joseph Urban. Proposed new locations included Columbus Circle and what is now Rockefeller Center, but none of these plans came to fruition. Only with the development of Lincoln Center on New York's Upper West Side did the Met finally have the opportunity to build a modern opera house.

The Metropolitan Opera said goodbye to its old house on April 16, 1966, with a sentimental gala farewell performance featuring nearly all of the company's current leading artists. Long-time Met star soprano Zinka Milanov made her last Met appearance that night, and among the many invited guests was soprano Anna Case, who had made her debut at the house in 1909. The final performance at the opera house was given not by the Met, but by the Bolshoi Ballet, which concluded a short run of appearances on May 8, 1966. The theater was purchased by Jack D. Weiler and despite a campaign to preserve the theater, it failed to obtain landmark status and the old Met was razed in 1967. It was replaced by a 40-story office tower, 1411 Broadway, intended to provide a steady income for the opera company. Designed by Irwin S. Chanin and completed in 1970, the building was later sold by the Metropolitan Opera and today it is owned by 1411 TrizecHahn-Swig LLC, a partnership of the TrizecHahn and Swig real estate companies. Since 1966, the Metropolitan Opera House at Lincoln Center has been home to the Metropolitan Opera.