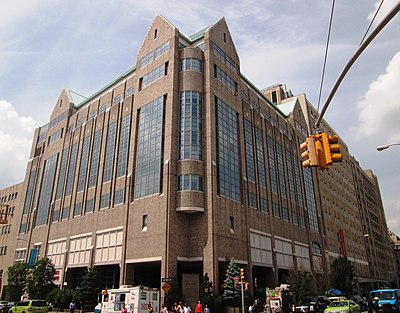 The front of the hospital pictured in 2014.
Morgan Stanley Children's Hospital of NewYork-Presbyterian (MSCH or CHONY) is a women's and children's hospital at 3959 Broadway, near West 165th Street, in the Washington Heights neighborhood of Manhattan, New York City. It is a part of NewYork-Presbyterian Hospital and the Columbia University Irving Medical Center. The hospital treats patients aged 0–21 from New York City and around the world. The hospital features a dedicated regional ACS designated pediatric Level 1 Trauma Center and is named after financial firm Morgan Stanley, which largely funded its construction through philanthropy.

The hospital is affiliated with the Columbia University Vagelos College of Physicians and Surgeons, and many of its physicians are faculty members of the college.

The hospital has nearly 250 years of history in treating children, tracing its roots to the establishment of Columbia University's – then King's College – Department of Pediatrics in 1767. Initially founded as Babies Hospital, it was established in 1887 in a Brownstone on 55th Street and Lexington Avenue. At the time of its opening, New York City's hospitals only had 27 beds catering to infants.

In 1929, the hospital moved from its Lexington Avenue site to Upper Manhattan to become part of the Columbia–Presbyterian Medical Center. The hospital underwent various expansions throughout the years and, during the planning of the new building, the old hospital had 168 beds and 6 operating rooms.

The Babies Hospital, which was New York City's first dedicated hospital for children, was founded in 1887 by Drs. Sarah McNutt and Julia McNutt and three members of the board of New York Infirmary, Jeannie Smith, Isabella Satterthwaite, and Isabella Banks.

Soon after its opening, Babies Hospital adopted this as its guiding principle: "The mission of the Babies Hospital is to relieve mental and physical distress, and even though the death rate is increasing thereby, a case is never refused admission because it is hopeless."

Since its founding, Babies Hospital physicians have helped shape the field of modern pediatrics and established numerous medical subspecialties.

The hospital, which initially had only women resident physicians, had 30 beds for sick infants and children up to three years old; malnutrition was the most common diagnosis. Its early leaders focused on milk sterilization, proper nutrition, and sanitary practices.

In 1887, L. Emmett Holt was appointed medical director. Under his leadership, Babies Hospital became the leading pediatric hospital of its time.

Babies Hospital was also the first hospital to use neonatal incubators in the U.S.

In 1900, Babies Hospital affiliated with the Columbia University College of Physicians and Surgeons to help train new doctors in pediatrics. In 1900, the Rockefeller family helped to fund the construction of a new Babies Hospital at its original site. That 10-story building still stands today as Children's Hospital North.

In 1903, Dorothy Reed Mendenhall, one of the first female physicians who discovered the blood cell disorder characteristic of Hodgkin's disease, completed an internship in pediatrics at Babies Hospital.

Babies Hospital retained an independent corporate identity until it was wholly merged into Presbyterian Hospital on Dec. 31, 1943.

The new facility in northern Manhattan had 204 beds for children up to 12 years of age. The New York Times referred to the new Babies Hospital as "the last word in hospital design and equipment," mainly because of revolutionary features such as private and shared patient rooms, playrooms, and a roof garden.

From 1930 to 1960, Rustin McIntosh, MD, was chief of pediatrics at Babies Hospital. Under his leadership, the hospital was one of the first in the country to develop programs in neonatal care, pediatric surgery, radiology, neurology, hematology-oncology, and psychiatry. As the director of pediatrics at the Columbia University College of Physicians and Surgeons, he assembled a department of noted pediatric subspecialists. These included Dorothy Hansine Andersen (pathology), Hattie Alexander (infectious disease), William Silverman (neonatology), John Caffey (radiology), and James Wolff (Hematology-Oncology).

In 1933, Hattie Elizabeth Alexander, MD, was appointed as an adjunct assistant pediatrician at Babies Hospital. During her tenure at the hospital, she developed a cure for influenza meningitis, which reduced the mortality rate to 20 percent in children and infants. Dr. Alexander was also the first woman elected president of the American Pediatric Society.

In 1953, Babies Hospital anesthesiologist Virginia Apgar, MD, created an easy scoring method for predicting infant health, now known as the "Apgar score." The Apgar score measures five body functions to determine the need for life-saving assistance within a minute of birth and remains the international pediatric standard for assessing newborn health. James Wolff, MD, was a founding member of the Children's Cancer Group, the first cooperative cancer treatment consortium in the United States, and also collaborated with Dr. Vincent Freda to discover the therapy for Rh disease.

In 1968, the hospital once again expanded and erected a new adjacent building. The new building doubled the size of the hospital and is now known as the "Central Building" of MSCH.

In the early 1990s, the hospital performed a renovation of its pediatric intensive care unit. The renovation was funded by Morgan Stanley.

Dr. Driscoll, a neonatologist, had directed the neonatal intensive care unit since 1971. In 1992, Driscoll was named chairman and remained chair until he retired in 2007.

In 2003, the Morgan Stanley Children's Hospital of NewYork-Presbyterian opened.

In 2009, MSCH made national news when they were able to remove and replace six organs and cut out a tumor in 7-year-old Heather McNamara. The surgery took 23 hours.

In 2013, the hospital installed a new pirate-themed CT scanner. It was installed by GE and designed to reduce the fear and anxiety of children getting a CT scan at the hospital.

In 2020, NewYork-Presbyterian was the top-ranked children's hospital in the New York metro area in the 2020-2021 rankings by U.S. News & World Report's "Best Children's Hospitals". In 2019, the hospital was ranked in all ten pediatric specialties.

The hospital has a variety of patient care units to care for infants, children, teens and young adults 0-21.

The Sloane Hospital for Women is the obstetrics and gynecology service within NewYork-Presbyterian Hospital and the Department of Obstetrics and Gynecology of the Columbia University College of Physicians and Surgeons (P&S) in New York City. It was originally founded in 1886 with Columbia P&S as a training and treatment center for obstetrics. It has now provided over 100 years of obstetrical care. The hospital is located within Morgan Stanley Children's Hospital.